I met a wonderful man today named Ekale from Cameroon. He has a joyful spirit and loves to laugh. He is a professional football player, known in the US as soccer. He used to play for the junior national team in Cameroon, Africa. Then he came to Hungary and played for the Ujpest team. Today he shared with me his testimony, and I want to share it with you. He said:

“I came to Hungary and I didn’t know the Lord. I was living in darkness. I mean I went as low as you can go into sin. And I began to have chronic pain in my legs. I went to many different doctors and they tried different medications, but nothing would help me. Most of the medications just caused more health problems for me. So the doctors didn’t know what to do. None of them knew what was wrong with me. This went on for eight years! In the end, the doctors said they would need to amputate one of my legs! They said that the following year they would probably need to cut the other leg off, too!”

The photo below shows the sad condition Ekale was in for so many years. The other photos he sent me show the grotesque disfigurement that this terrible illness did to his body. He told me that it wasn't just his legs. Each day it seemed that he would notice the disease spreading to some other area of his body. It was mainly attacking his spine, but other areas of his body were decaying as well.

He went on to say, “Then a friend of mi 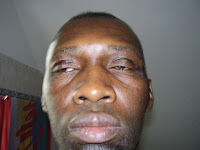 ne from Ghana, who was not even a Christian believer, told me that if I want to be healed, I should go to the International Church of Budapest. I didn’t know Jesus, but I went there. I had a little seed of faith in my heart that God would heal me. At the church, they prayed for me, and God completely healed me. Later after they shared the gospel with me, I gave my life to Jesus. And now for eight years I have had no pain in my legs at all, and I am free of medication. Praise God!”

Today Ekale is a walking testimony to the miracle power of Jesus Christ. To see him, you would never know that he was once so ill. He told me that when he visited the International Church of Budapest he did not believe in Jesus. But he did believe that if they prayed for him that he would be healed. Later, a man named Ebenezer from the church continued to stay in touch with Ekale. He shared the gospel with him and Ekale eventually repented of the way he was living in darkness. He departed from his hedonistic lifestyle and gave his life to the Lord. What an amazing miracle God did in his life.

Perhaps you are in pain and need the Lord to heal you. Jesus Christ loves you and knows about your problem. If you will cry out to him right now in faith believing, He can heal you. But even more importantly than that, He will save your soul, if you will repent of your sin and ask Him to forgive you.

Len Lacroix is the founder of Doulos Missions International.  He was based in Eastern Europe for four years, making disciples, as well as helping leaders to be more effective at making disciples who multiply, developing leaders who multiply, with the ultimate goal of planting churches that multiply. His ministry is now based in the United States with the same goal of helping fulfill the Great Commission. www.dmiworld.org.
Posted by Len at 2:38 PM