Outpouring of the Spirit 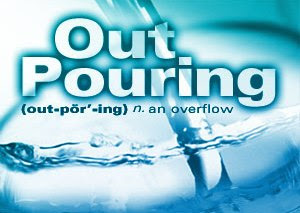 I want to share with you what has been happening here in our lives this weekend.  God is doing amazing things!  What follows is an excerpt from a letter we sent today on New Years Day to some of our partners:

There have been many things leading up to this that I won't go into, but will simply allude to at the end.  But last night on New Years Eve, we and the girls listened to Baptized with Fire, specifically just Book# 1 of five books, after the boys were in bed. We were all so encouraged to pray and seek the Lord.

Afterward at almost midnight, we had a time of prayer.  I prayed for my wife and each one of my daughters, to give them my blessing for the coming year.

My eleven-year-old's experience during this was that she felt that God had set her free!  Afterward we could all see it on her face and in her eyes.  She now looked at peace and her face was aglow, whereas it had not been so beforehand.  It looked so light bright and light.  It looked like scales had been taken from her eyes.  They are clear and glowing with light now.  There is gentleness upon her face that was not there before.

The girls prayed on and on in the Spirit with us, and never got bored with it.  They never got tired.  They could have prayed all night long, and they wanted to, because they got new strength from the Lord when they started praying.

My thirteen-year old daughter was filled with the Spirit like never before.  She said she felt the power of God like electricity go through her whole body. Her hands and her jaw were shaking and she could not stop herself from speaking in tongues.  When she was speaking in tongues, she felt that what she was saying was really expressing her feelings and what she wanted to tell God from her heart. She kept her eyes closed, and she said it helped a lot.  Jesus revealed a part of Himself to her.  He showed her that He is listening and He cares about her and He wants to know her.  She told Him she wants to know Him.  She said she knows He loves her and she can’t really say how much He loves her.  When I got near her, I felt that when she was praying in the Spirit, she was saying, “I praise you, Lord.  I praise you!  I’ll praise you forever, as I stand before you throne in the midst of a multitude from every nation, tribe, and tongue.”  And many other things like that.

My nine-year-old daughter also got baptized in the Spirit.  She said her jaw and hands were shaking as she prayed.  She was praying VERY loudly in the Spirit!  She did not stop for an hour like that on her knees and lifting her hands to Jesus.  This has never happened to her before!

We went from just before midnight until about 1:15 AM.  As the nine-year old was repenting and confessing her sin before the Lord, praising Him, and telling Him she would serve Him forever.  She was praying against any curses the enemy would try to put on us, and against any temptations that would come at us.  As she prayed in the Spirit, and I knelt beside her, I felt she was praying many different things like, “There is a light that shines around your throne and it is brighter than any other light.  Your face is brighter than the sun, Jesus, and your eyes are like blazing fire. You love me more than anyone else.  You are so adorable, so beautiful.  You are the lily of the valley, the Rose of Sharon. How lovely you are to me!  I give you my whole life and will serve you forever..." and many other things like that.

I wept before God for joy that he had baptized my three girls with the Holy Spirit.  There was no denying it was real.  Even when I stopped praying or quieted down, they kept going with great fervency like they would never stop.

I eventually was so tired and wanted to go to bed, but my wife and two of the girls did not want to stop.  I convinced my wife that she needs her rest, but the two girls wanted to stay up.  So they read their Bibles in my office until 2:00 Am, after everyone was in bed.

Today around noon-time, I shared some things in the kitchen with the family that the Lord had shown me during my quiet time from 1 Cor 14, Rom 8, and Eph 4:30-32.  There was more repentance from all of us, my six-year-old son got baptized with the Spirit and spoke in tongues for the first time, and again, it was an awesome time.  We all met with the Lord and my wife wept.

God is so good!.  He has been very merciful to me and all of us here.  Let us seek His face.

In addition to the audio book I mentioned and linked to above, there have been many other things the Lord has been saying and doing by His Spirit. You would need to go check out some of my blogs to really take it all in...but I'll mention a few of them at the very end.  Perhaps the things that affected us the most were the testmonies of the following people:

Bill Kolikata, an Australian pastor who died and saw heaven

Daniel, a Nigerian pastor who was raised from the dead, who saw heaven and hell

Those were the main impacts prior to "Baptized with Fire" that I mentioned at the beginning.  Some other earlier examples of things that impacted us are:

Supernatural Power for All Disciples

Why we no longer celebrate Christmas

Holy Living in a Perverted World

My hope and prayer is that these things spark true repentance and Holy Spirit revival in your life, just as they have in ours.

Author's note: If you enjoyed this post, you may also like the other posts in this blog available through the links in the side bar. You may also access my complete blog directory at "Writing for the Master."


Len Lacroix is the founder of Doulos Missions International.  He was based in Eastern Europe for four years, making disciples, as well as helping leaders to be more effective at making disciples who multiply, developing leaders who multiply, with the ultimate goal of planting churches that multiply. His ministry is now based in the United States with the same goal of helping fulfill the Great Commission. www.dmiworld.org.
Posted by Len at 8:32 AM No comments: