Like a Man Finding a Pearl of Great Price

A lady we know in our church, named Gyöngyi (pronounced JEN-jee), testified to a real miracle of God’s provision yesterday. She owns a flat that she rents out, in order to bring in much needed income. She explained that she is a pensioner due to a disability, and the pension alone is not enough for her and her husband.

She said, “Recently our tenants moved out suddenly and unexpectedly, leaving the place in bad condition. We prayed about this and asked the Lord to provide. Then one day as we were driving down the road in our car, my husband said, ‘The twenty thousand forints!’ He stopped the car, got out, and bent down behind the car to pick up what he thought was a single, twenty-thousand-forint bill. But as it turned out there were two of them. They were fresh, crisp bills that were folded together perfectly. It was obvious they had never been in anyone’s pocket or wallet, because they were completely new and unwrinkled. They had been lying right in the street in front of our car as we drove along!”

For those who don’t live in Hungary, you need to understand that twenty thousand forints are equal to a little more than one hundred US dollars. So this is no small amount of money.

She went on to say, “Then not long after that, as I was walking along a sidewalk, I looked down and found what I thought was another twenty-thousand-forint bill. But when I picked it up, I realized there was also ten-thousand-forint bill with it, so it was actually thirty-thousand forints! Nearby there lived a lady we know, who was outside in front of her home. I went over and spoke with her, in case this belonged to her. But she didn’t say anything about having lost any money. So I knew that this was the Lord’s provision once again. These were just like the bills we found in the street recently. They were fresh, crisp, new bills that had never been in anyone’s pocket or wallet.”

“My husband can’t understand why God answers my prayers this way and not his. I think the reason is that he always says that we must work for every forint and you can’t just expect money to fall from heaven. But I believe that God can do miracles when we pray. In fact, I once had a dog that would find money like this and bring it home to us. So I do believe that God’s angels placed those bills on the ground for us.” This was not the first time the Lord Jesus answered Gyöngyi’s prayers this way. And she definitely gave Him praise yesterday for this.

It’s interesting to note that Gyöngyi’s name is connected with the word, “Pearl”. And like when a person finds a pearl of great price, the Lord has blessed her more than once allowing her to find large amounts of money in answer to prayer when she is in great need. It’s just amazing how the Lord does the impossible to show us His love and supernatural care for His children. And I also agree with Gyöngyi that the Lord did this in response to her great faith.

I’m reminded of all the passages where we see that Jesus did miracles in response to a person’s faith in Him. If you search the gospels, you’ll see what I mean. Over and over, Jesus would say, “Your faith has made you whole,” or “Because of your great faith, you may go. Your daughter is healed.” The Lord still honors simple, childlike faith in Him. What are you trusting God for today? Do you believe He can do anything He wants in order to meet your need in answer to your prayers to Him in His son Jesus’ name? Let me encourage you to do so today. 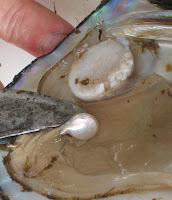 the words of Jesus Christ, who said, “Again, the kingdom of heaven is like a merchant seeking fine pearls, and upon finding one pearl of great value, he went and sold all that he had and bought it.” (Mat 13:45-46). Pearls found naturally, rather than today’s man-made pearls, are very valuable. A wise merchant finding such a precious pearl would sell all his earthly possessions in order to have enough money to take that one little pearl into his possession. He would do so knowing it is worth more than all he owns. And Jesus taught us that God’s Kingdom is like that, too. There is a kind of discovery that you need to have, where you find Jesus. At that moment you come to know for yourself his great value to you personally. When that happens, you will forsake all else to follow Him. Have you found Jesus personally? Have you forsaken yourself and all you hold dear to follow Him?

Attribution notice: Most Scripture quotations taken from the NASB. The "Rare Treasure" painting by my seventeen-year old daughter, C.V. Lacroix. You can find more of her lovely artwork at A Brush with Life.

Author's Note: See my daughter's poem, called "Pearl in the Sand." I also recommend reading The Truth Set Me Free! and The Cult of Mormonism. You are invited to my collection of blogs at Writing for the Master.

Len Lacroix is the founder of Doulos Missions International.  He was based in Eastern Europe for four years, making disciples, as well as helping leaders to be more effective at making disciples who multiply, developing leaders who multiply, with the ultimate goal of planting churches that multiply. His ministry is now based in the United States with the same goal of helping fulfill the Great Commission. www.dmiworld.org.
Posted by Len at 7:12 AM