Boy Raised from the Dead After One Day

I received the following testimony from brother Justus (pictured below with blue jacket and red tie), one of our Doulos Training School (DTS) students, who is a pastor in Uganda. The Lord recently used him through the power of Jesus' Name to raise from the dead a boy who had been deceased for a day. He wrote: 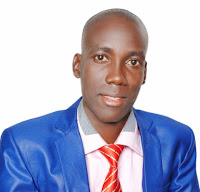 "GOD is good and worthy of praise. Last week, June 13, 2021, l was called for a family deliverance in Boke Lira City, Uganda. There was a son born in this family named Odongo Hosman, thirteen years old. The boy was paralyzed, could not walk, sit, or turn off to the other side of the bed...

The condition [grew] worse and unbelievable. His parents tried their best caring for and taking Odongo to Hospital, but there was no improvement, to the point where the boy died.

As l ministered to the family from Rev.5:5 the boy began to sweat. Life came back [into him], when I was holding up the boy in my chest.

[A week later] on June 20, 2021, the father gave a testimony through the phone call saying [that] because of the lock down they have gone to the village; and he continued saying that the boy is walking, running, eating and completely healed.

He later clarified that the parents could not continue taking the boy to Mbale Regional hospital, to which he had been referred by the local doctors in Lira, who had been puzzled at the boy's condition. As the boy was brought home on June 12th, around 9:00 pm, he stopped breathing, his body became very cold, his eyes turned white, and the elders pronounced him dead. The report went to the village where the father comes from, and they were waiting for the body in the village. The following day (June 13th) was when brother Justus was called in to minister to the family, and the boy was brought back to life. 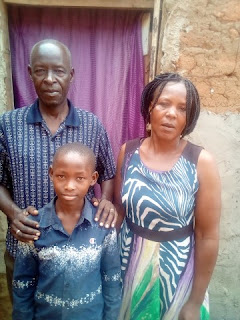 On July 23, 2022, a year after the incident, I finally called and spoke to a brother named Nelson Ociti (pictured left), who witnessed this miracle firsthand. This man is a pastor, who is now raising the boy himself, since the boy is a relative of his without anyone to raise him.

You see, the boy's father is Nelson's nephew, the son of Nelson's sister. And the relationship between Nelson and the boy's father was so close that Nelson called him "my son". But at the time that the boy died, the boy's father had already passed away, and his mother had remarried someone else in another place, leaving the boy effectively without any parents.

The boy was from a very poor family, and when he became very sick, the mother came and took him to the health center. But when his condition worsened, she brought him back to brother Nelson (his great uncle) and then she went away again.

Finally the boy was pronounced dead. The next day they had the dead boy in a sitting room, and brother Nelson asked brother Justus to join him in praying to God for the boy to be revived. This attracted many neighbors from the local area, who had gathered around to witness it, and women were screaming, because the boy was dead. As these two brothers prayed for the boy, they saw him begin to breath, so they covered him with a blanket and a papyrus mat.

The boy woke up sweating all over. He looked tired and miserable, and he was unable to speak. He was looking around at all the people who were watching, but he did not know what had happened to him. At that point, brother Justus put the boy up high on his shoulders, and the boy was so light that Justus could barely feel his weight. At that point all the people were rejoicing, because they were so grateful that the boy was alive again.

Then they had the boy bathed and afterward they organized to get him some porridge to drink, since he hadn't eaten in  days. He was able to consume the drink, and after a few hours he was able to walk with some help from others, although he struggled to do so, since he still had poor balance. But within a few days he was able to regain his strength and walk on his own once again. However, as I mentioned already, the boy was not aware that he had been brought back from the dead, and he had no experience to report about with regard to the period when he was dead.  In other words, he had no memory of any supernatural experiences that may have occurred.

Since that time, brother Nelson has gotten married and is raising the boy with his new wife as their adopted son (pictured altogether above). His marriage to this woman was organized so that they could raise the boy and brother Nelson's children together, because Nelson's first wife had died of diabetes five years earlier, and he had been a single parent during that time. Brother Nelson says the boy has a good disposition and goes around smiling all the time, but he needs the Lord to heal him from the emotional trauma caused by his fellow classmates at school and others, who know about what happened to him and persecute him.

Hallelujah! Praise the Lord for what He has done for this boy and his family. Some people don't believe this is even possible. But Jesus said, "I tell you the truth, anyone who has faith in me will do what I have been doing. He will do even greater things than these, because I am going to the Father." (Jn 14:12, NIV). Why should anyone consider it incredible that God raises the dead?

Attribution Notice: All Scriptures taken from the Holy Bible NIV, copyright Zondervan, all rights reserved, used by permission.
Author's Note: Some changes were made to the wording of Grace's testimony with his permission, in order to add clarity or for easier reading without changing the meaning.
If you still have any doubt as to whether this testimony is true, please read Have the Spiritual Gifts Ceased?.
If you enjoyed this post, you may also like to read these other testimonies called Pastor Raised from the Dead, Testimonies from Voila, Amazing Healing and Deliverance in Uganda, The Body Parts Storehouse in Heaven and The Night the Lord Came into My Hut. You are also invited to read the testimony of Elisabeth from Indonesia that he referred to call Forty Days in Heaven and Hell. Also see the Home page of this blog for more testimonies. You are invited to view my collection of blogs at Writing for the Master.