My Mother's Going Home to Be With Jesus 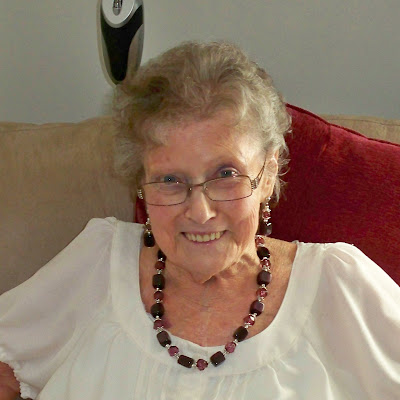 Well, I got the phone call today that my mother passed on into eternity to be with Jesus. Naturally, it's difficult, especially living overseas and having just lost my father seven months ago. Of course, we love her and will miss her. But her suffering is all over now, and that relieves us. She had been suffering so much in recent days.

I had visited with her in June for almost two weeks, and the Lord had temporarily restored her health in answer to prayer, which enabled me to enjoy the time together with her. We talked and prayed together and I read Scriptures to her, including Revelation 21, where heaven is described. This really encouraged her. Some of the verses we read included the following:

"Then I saw a new heaven and a new earth; for the first heaven and the first earth passed away, and there is no longer any sea. And I saw the holy city, new Jerusalem, coming down out of heaven from God, made ready as a bride adorned for her husband. And I heard a loud voice from the throne, saying, 'Behold, the tabernacle of God is among men, and He will dwell among them, and they shall be His people, and God Himself will be among them, and He will wipe away every tear from their eyes; and there will no longer be any death; there will no longer be any mourning, or crying, or pain; the first things have passed away.' And He who sits on the throne said, 'Behold, I am making all things new.' And He said, 'Write, for these words are faithful and true.' " (Rev 21:1-5)

We talked about the fact that she had committed her life to Jesus and was trusting in Him alone for her salvation, and she was ready to meet Him. She was not trusting in her own good works or in her religion to save her, but in her Lord and Savior, Jesus Christ. She believed the Word of God where it is written, "For by grace you have been saved through faith; and that not of yourselves, it is the gift of God." (Eph 2:8). I asked her, "Mom, what do you want the Lord to do for you." She said, "Whatever He wants. If He wants to keep me here longer, I'm ok with that. And if He wants to take me, that's fine, too. I'm ready."

About ten days ago, I spoke with her on the phone and read Psalm 23 and Revelation 21 to her once again. She was especially encouraged at the thought of her eternal home in heaven. It was during one such call with her this month that I told her I released her to the Lord. I wanted her to know that I was not holding her back from going to be with Him.

Last night we had the chance to do a video phone call with her. Unfortunately she had become unresponsive for the past couple days, and was languishing between life and death in her bed at home. She was unable to eat food or drink water any more and could not open her eyes or speak. But we encouraged her, prayed for her, and the children sang some worship songs during the call to lift her spirit.

Later on after the video call, I called a dear elderly friend of mine named Mel, who has been used mightily by God over the course of his life. He has traveled around the world, preaching the gospel, healing the sick, and setting captives free. He's got a great sense of humor and always tells me how many years he has left until he turns 114. When I told him about my mother, he remembered visiting her and my father a few years ago and praying with them both. So he agreed to pay her a visit.

At my mother's home last evening, Mel anointed her with oil and prayed. His prayer was that as the anointing oil ran down Aaron’s beard and over his shoulders, that the healing power of the Holy Spirit would run from the top of her head to the soles of her feet. He then asked for the Lord to bless her with a foretaste of heaven by letting her experience the Shekinah glory of the Lord in her body at that very moment. He said he felt the presence of the Lord so powerfully as he prayed for her.

This morning, she was in her home laying in bed with her family around her. The last time she had opened her eyes a few days ago, they were all jaundiced and could not focus on anyone, but would just roll back and look at the wall while people spoke to her. Her eye lids would only open partially and her eyes looked like they were just swimming in pools of water. My family members were all praying for her this morning, reading Scriptures to her, and releasing her to the Lord. Each one told her they loved her, assured her that she was free to go be with Jesus now, and that they would be all right.

At one point while they were encircled around her bed on their knees praying, Mom opened her eyes for the first time in days and looked right at my sister who was praying. But now she had crystal clear, blue eyes with no signs of sickness in them, and her gaze was focused right on my sister’s face. She was looking right at my sister with healthy, sparkling eyes that were wide open, and a beautiful, peaceful look on her face. The look on her face was one of immense thankfulness that she was ready to meet the Lord and was now going to be with him. This moment lasted about a minute or two. Then she released her grip on my sister’s hand and her eyes closed as she left her body and went to be with Jesus.

We know that at that moment, her spirit came up out of her body and was escorted by God's holy angels into His presence in heaven. What a glorious homecoming she is having now! "To be absent from the body" is to be "present with the Lord." (2 Cor 5:8)

I'm reminded of a dream my daughter had three months ago. In her dream she saw my mother and father in heaven. Their hair was brown and they did not look old. They were wearing white robes and silver belts. And we know that the beautiful, healthy blue eyes my family saw this morning were a glimpse of the complete health she is now enjoying in heaven. For her, there will no longer be any death; there will no longer be any mourning, or crying, or pain.

"For we know that if the earthly tent which is our house is torn down, we have a building from God, a house not made with hands, eternal in the heavens." (2Co 5:1)

You're invited to read her online obituary, where you will have the opportunity to sign the guest book. Your comments here on this blog post are also welcome.

Attribution notice: Most Scripture quotations taken from the NASB.


Len Lacroix is the founder of Doulos Missions International.  He was based in Eastern Europe for four years, making disciples, as well as helping leaders to be more effective at making disciples who multiply, developing leaders who multiply, with the ultimate goal of planting churches that multiply. His ministry is now based in the United States with the same goal of helping fulfill the Great Commission. www.dmiworld.org.
Posted by Len at 11:55 AM